While landmine clearance is what HALO is known for, and it accounts for the majority of our work, we don’t stop there.

Conflict leaves behind a lethal tide of weapons, ammunition and explosives. The fighting may be over, but families will not be safe to live until the dangerous debris has been cleared and weapons and ammunition secured.

HALO works with countries recovering from conflict to make towns and villages safe and restore confidence.

In 2017, a huge explosion ripped through a military ammunition store in Primorsky, throwing thousands of bombs across the surrounding countryside and killing three people. With help from the local authorities we have now cleared tonnes of explosives. Normality is returning to the village, but this terrible accident demonstrates the vital need to ensure that weapons and ammunition left behind after war are made safe.

El Salvador has a high murder rate, partly due to the large numbers of guns imported during the civil war.  Unsecured guns, combined with gang culture, mean local people like Maria, fear for their safety every day. We are working with the Police and Armed Forces to secure weapons and build a safer future for El Salvadorans.

“All the young ladies who live in my neighbourhood end up being girlfriends with the gang members, some of them out of fear, some of them by choice; but they all end up in trouble or dead.
This is why I do not want to have children yet. Unless we moved elsewhere, their future would be at risk.”

By training local police and soldiers to manage arms stores, we build capacity and help communities to help themselves. Consequently, we play a key role in achieving peace and stability after conflict. 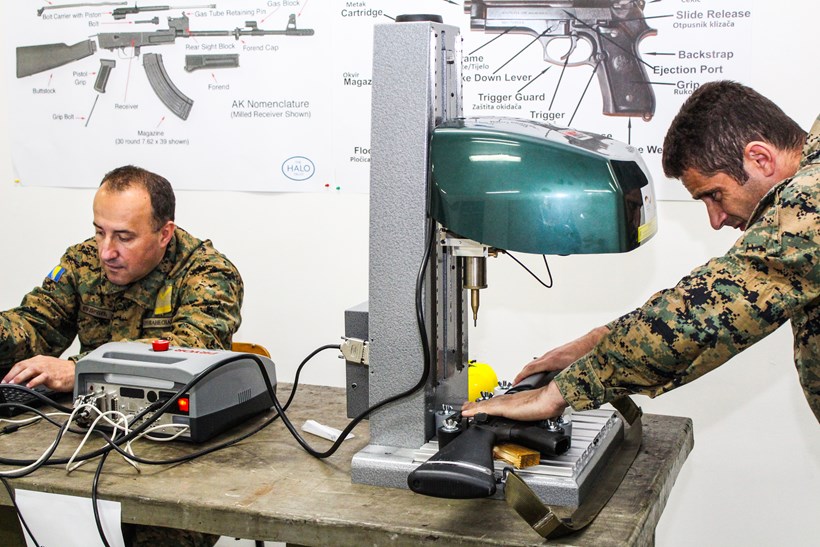 HALO works with governments and national security forces to mark and register state stockpiled weapons and those found or seized by the police.

Marking and record keeping allows the tracking and tracing of weapons, reducing the likelihood of them falling into the wrong hands and making communities safer.

Sign up
Useful Info
Get Involved
Get in touch