On September 26, the mood in the Danielyan household was festive. Twenty-five-year-old Gor was due to be married on the 29th and the whole family was helping prepare for the big day - shopping, cooking and decorating the house.

The following morning, everything changed. “At 7:10am we heard two big booms,” says Gor’s mother, Mary Avagyan. “I came out to the balcony, saw the smoke, grabbed my grandkids and ran to the first floor.” By the next day, the entire family had mobilized. Gor and his brother were serving in the rescue service and the volunteer army. Their father, Shahen, a truck driver, was helping transport goods, and Mary, a nurse, worked around the clock at the hospital, sleeping in the shelter there.

The Danielyans live in Martuni, one of the hardest hit residential areas in the Second Karabakh War. After the war, they returned to find pock marks of fragmentation on the outer walls of their home, a LAR-160 rocket in their front yard, and several pink ribbons - the telltale sign of M85 cluster munitions - strewn about their property. To the side of their driveway, they found an unexploded M85.

A HALO survey team, led by Arayr Margaryan, visited the family to assess the risks and organize the safe removal and destruction of the unexploded munition.

During the conflict, HALO staff mapped the areas of explosives contamination, dividing them into polygons and recording any reported information about the whereabouts and types of munitions found in them. Now survey teams like Arayr’s are being dispatched to these polygons, beginning with those in the most heavily populated areas. In tandem, HALO is conducting risk education, handing out leaflets with information about the deadly munitions that people returning home may encounter.

Weeks after the ceasefire, Martuni’s streets are still quiet, but residents like the Danielyans are slowly returning. As the survey team drives through town, passersby nod or wave in acknowledgement. HALO has been active in the region since 2000, clearing landmines from the war in the 1990s and providing mine risk education in schools. Now, in the aftermath of this recent war, with unexploded ordnance scattered across streets, homes and schoolyards, there is a renewed urgency to their work. 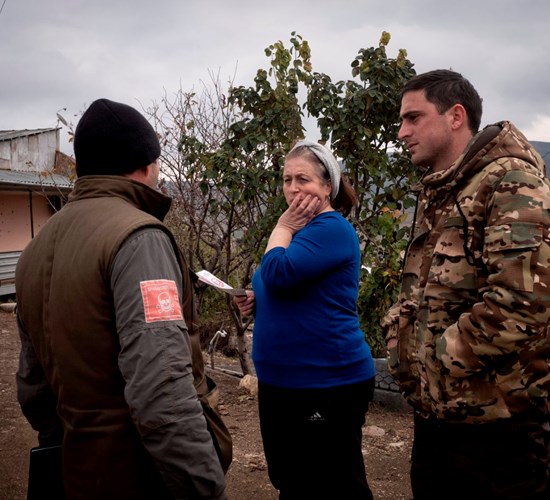 Gor and his fiancée still plan to get married once their families have safely returned: “We won’t have a party, just a quiet ceremony, but it’s important that we do this. We are all in mourning, but life must go on.”

Story by Nyree Abrahamian and photography by Scout Tufankjian