In the far southeast of Angola, in the Province of Cuando Cubango, there are few roads and vast distances between settlements. Without the help of Mission Aviation Fellowship (MAF) and their pilots, The HALO Trust would struggle to reach the communities who have been blighted with minefields since Angola's long civil war.

HALO has returned to the province, after a gap of several years, to clear 153 minefields in two national parks - Longa-Mavinga Park and Luengue-Luiana National Park. To allow the parks to be protected and to enable wildlife to return, the minefields need to be cleared.

By protecting this vast wilderness HALO is helping to protect the Okavango Delta which is fed by the rivers that cross the Province from Angola's highlands. 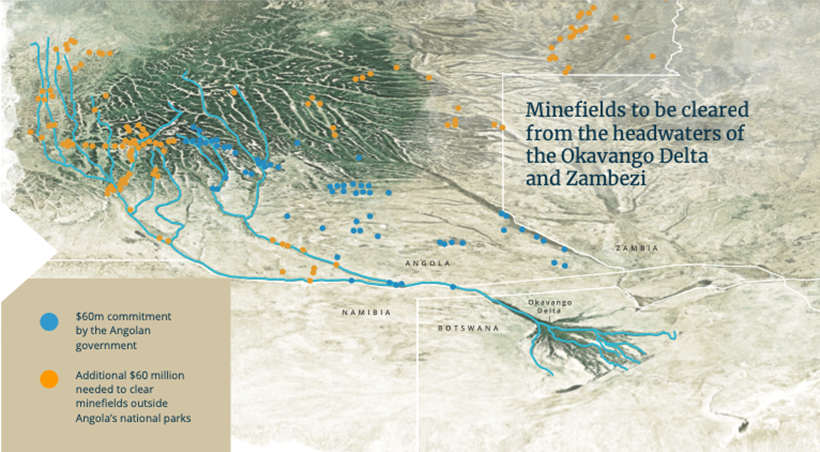 MAF started work in Angola in 1989 and has been providing flights to HALO since it started Angolan operations in 1994. MAF's aircraft enable HALO to reach isolated mine-affected communities and provides a crucial casualty evacuation service for HALO should any accidents ever occur to HALO staff clearing minefields.

MAF also provided transportation for visitors when HALO hosted Prince Harry in the far south of Angola in September 2019. MAF pilot Marijn Goud met the Prince, who told him how important MAF's services were to HALO:  “HALO could not do it without you, thanks!” said Prince Harry.

“As people providing technical support and practical help for rural Angolan communities, we are pleased to be able to support The HALO Trust in their efforts to remove landmines and other unexploded ordinance. Although the conflict has been over for many years, this material continues to cause horrific injuries and death to rural people generations later. We are excited to see cleared areas of land returned to community use for farming, schools, and housing, freed from the land-mine threat that existed for so many years,” shares Lowell Deering, VP of Operations and Recruiting, for MAF Canada.